Plus, plans are in place to add lunch and takeout.

Ramen Shop is a popular destination for lovers of ramen and craft cocktails alike, and they've got the wait times to prove it. Thankfully, it looks like partners Sam White, Jerry Jaksich and Rayneil De Guzman have found a way to mitigate the backup, debuting a new cocktail bar over the weekend.

As we reported back in 2014, the Ramen Shop crew acquired the neighboring space with plans to turn it into a cocktail bar, thereby freeing up more dining space next door. The resulting new addition opened on Saturday, creating about 20 more seats for dining in the restaurant, plus a bigger bar, lounge area and a narrow outdoor space for enjoying cocktails al fresco, which the team hopes will lower wait times. And while the kitchen team is still playing around with the bar menu, there will be a small selection of snacky things like scallion pancakes, dumplings and Japanese pickles to appease hungry patrons. 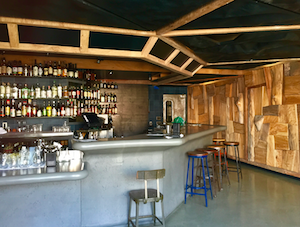 The larger bar also means a larger, more frequently rotating cocktail offering in the near future, as well as a reserve list of hard-to-find Japanese whiskeys and sour beers that will appear later in the fall. The expansion also created more kitchen and storage space, including a special room just to house the restaurant's two new, custom-made Japanese noodle machines, which partner Sam White says will produce noodles for the shop twice as fast as before.

According to White, all the extra kitchen space means that they'll be able to do even more of what they were doing before, with the addition of lunch in the fall, catering and the possibility of takeout. If all goes well, they're even entertaining the idea of selling Ramen Shop noodles freshly packaged to take home.

The space was designed by Wylie Price (The Progress, Kronnerburger), who is also responsible for the original Ramen Shop look next door. The light-colored walls are the work of Ido Yoshimoto, an Inverness-based artist who pieced together scrap wood to create a rustic installation. Dark plaster ceilings and a cement bar are part of the look, which offers a sleeker, moodier feel than the neighboring dining room. One major change: Rather than entering the old space, guests now pass through the cocktail area and stop at a hostess stand before entering the dining area, which is a bit of a switcheroo for regulars.