He has big plans for the space

When news started to spread that Saison was hosting an unknown sushi chef for a pop-up, it caused a splash, followed by an even bigger splash after the announcement that they were looking for a permanent restaurant space together. Plans for that project have since been called off (for unclear reasons), and Japan-trained sushi chef Jiro Lin has been bouncing around the city, including a short stint at Michelin-starred Hashiri. Now he’s back at Hamano, where he had worked for nearly 15 years before Saison chef Joshua Skenes lured him away.

This time though, Lin isn’t just working at Hamano again — he owns it. “Hamano is my roots. I had other plans before I stepped in here, but I halted them because I love this neighborhood,” he told Eater “I’ve been here since 2003, so this is kind of my home. I’m very glad to come back and start seeing all these people again.”

For now, Lin is operating the restaurant as usual, but he has big plans for changes after a renovation and some new hires. “We’ll do remodeling next year, and then we’ll come out with a totally new execution,” he said. His concept is to offer omakase at a more affordable price point than many of the city’s newcomers. “Right now, there are so many omakase places opening, but at a high price. And once you get a Michelin rating, you start charging Michelin prices,” he explained. “I want people coming comfortably and also within the affordable rate. But don’t underestimate — I’m not charging Michelin rate, but it’s still prime quality.” 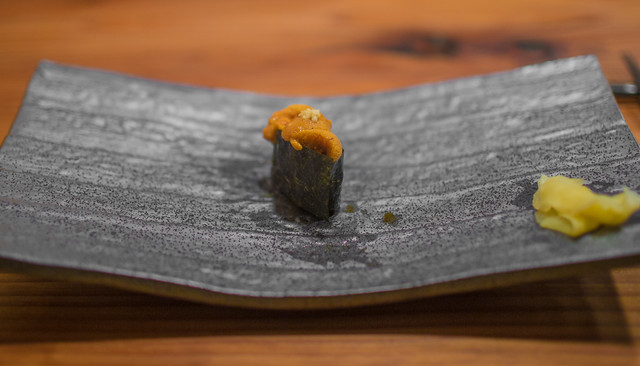 With that in mind, Lin hopes to charge between $90 and $150 for 12 to 15 pieces of sushi, plus three to four small plates using seasonal ingredients. For fish only, the menu would cost around $75 to $90 for 12 pieces or $48 to $55 for eight pieces, but it all depends on the ingredients sourced directly from Japan. “Sushi pricing is very complicated to explain,” he said. “It’s hard to realize how expensive the fish is lately [from Japan], and also when you buy it from the market versus fishermen versus out of the boats, that’s all different quality and pricing.”

Lin plans to do the renovations in two parts to avoid closing, starting in January, and hopes to wrap it up in March, when he will open with a brand-new website (the current one is very outdated), more seats at the sushi bar (for a total of 11), and a modernized dining room (warmer light, new flooring and light fixtures, rearranged seating).

Above all, Lin cautions that the Hamano experience right now is not at the level he wants it to be. Walk-ins are not receiving his omakase, since he needs to order and prepare the ingredients in advance. Come March, though, following the renovation and new hires, a new Hamano will debut. For now, it’s offering the a la carte menu it always has in both the dining room and at the bar. Stay tuned for more details.