Single Thread Explained: What to Expect at the Restaurant, Inn, and Farm

Share All sharing options for: Single Thread Explained: What to Expect at the Restaurant, Inn, and Farm

Single Thread has been talked about, some might say, ad nauseum since the ambitious restaurant, inn, and accompanying farm was first proclaimed as The Biggest Opening of 2016 by Eater National— almost a full year before it opened. Indeed, it slid in just under the wire for a 2016 debut at all, finally opening to the public on December 2.

But, now that the dust has settled, and has been neatly swept away by chef Kyle Connaughton and wife/farmer Katina Connaughton, it’s clear to see why the restaurant has been the subject of so much exuberant admiration, before it even served a single guest. The details that have gone into each component are many, from the immaculate kitchen to the stylish dining room.

Now, after years of careful planning and hard work, it’s now open. Here’s what to expect, and how to navigate the 3-in-1 concept: 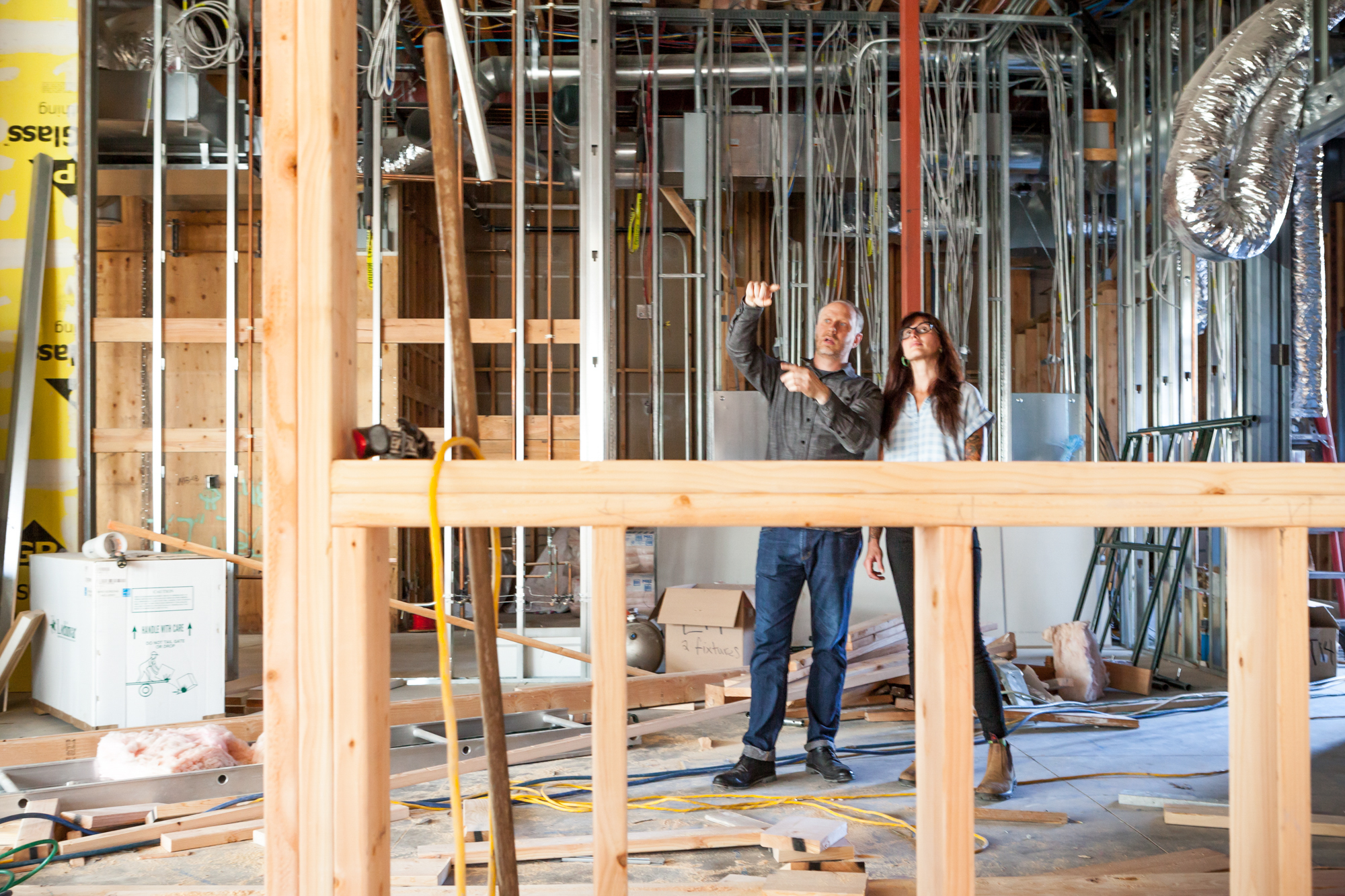 Single Thread Is the Biggest Opening of 2016

Kyle Connaughton, the best chef you've never heard of, is stepping into the culinary spotlight — and critics, Michelin inspectors, and diners will be watching.

The entire project is a clear extension of the two people who dreamt up this deluxe fantasy of a restaurant and inn, where at every turn minute details are woven, literally, into it. As Kyle often says, the duo considers it a direct extension of their home, welcoming guests in and embracing the Japanese concept of omotenashi, the “spirit of selfless hospitality, anticipating needs without having to be asked.”

The first glimmers of what would become Single Thread appeared while Connaughton worked in some of the world’s best kitchens, including five years at Heston Blumenthal’s The Fat Duck, with his family in tow. Yet no place made more of an impression than Japan, where Kyle worked with French chef Michel Bras at his restaurant Toya Japon in Hokkaido. While in Japan, Katina learned sustainable farming techniques, working for three years on a strawberry farm. Between them, they developed the foundation for hospitality, and style of cooking that would become Single Thread, putting down roots in Healdsburg in 2014, alongside the restaurant.

The Name and Logo

The Single Thread logo, which adorns everything from chef coats to stationary, is in the image of an onion flower. Connaughton says that the onion is the only vegetable that they can grow at the farm, and serve, all year long. It’s the single thread that connects everything.

Open to the restaurant, the “finishing kitchen” is a silent hive of activity. It’s also a gorgeous fishbowl of food preparation, where negi (Japanese green onions) are roasted in the hearth, and illuminated shelves of donabe (traditional Japanese cooking vessels) line the walls. It’s actually the first thing a guest sees upon entering the space, through a small window directly aligned with the door to the building.

Innovation and custom design are a large part of the way Kyle is wired, from his background at Fat Duck to his partnership in the culinary consulting group Pilot R&D, which he co-founded with Dan Felder and Ali Bouzari. His kitchen is no exception, with high-end California-made Hestan stoves and a wood-burning hearth that supply heat in the open kitchen, with another prep kitchen, and refrigerated butcher room designed specifically to handle whole animals out of sight.

It should be noted that the entire place is wired like the CIA, all in the name of hospitality. The service team uses cameras to track the progress of each party on the property and Slack, the San Francisco-based messaging app, to communicate with one another real-time. If a team member on the roof is informed of a diner’s allergy, they use an ipad to communicate that to the kitchen, where it is broadcast onto one of two giant flatscreen TVs hanging above the entrance. While hospitality in its purest form is shared between two humans, a little boost from technology takes it to the next level.

Finally, when the dining room has slowed and the kitchen is beginning to break down and clean, sound cancelling pocket doors are pulled shut to separate the two rooms.

Designed by Avroko, the design company and hospitality group behind Ninebark, the 55-seat dining room is completely custom, from the furniture to the lighting. Avroko designed and produced the tables with inlaid brass, matching upholstered chairs, and lighting fixtures. One of the more intriguing creations is a chest featuring columns of drawers, each one containing the proper place settings for a specific table. The drawers are lined with felt to prevent any distracting clanking noises, and are pre-set to correspond with the menu and number of diners at a specific table.

The lighting system is set to change seven times throughout the evening, incrementally adjusting the lighting as the evening progresses. The system knows the date, and adjusts the lighting based on the time of sunset.

Most aspects of this restaurant can be considered art, the result of deep thought and craftsmanship from the wood-tiled floor to the serving vessels. A prime example are the woven screens that separate various parts of the dining room. The 12 woven screens each represent a month in the year. Each screen is woven to recreate the DNA strands of a vegetable from that season, like onions. It’s subtle, but thoughtful, in keeping with the underlying intellectual nature and simple good taste that the Connaughtons have injected into all parts of the project.

Off from the main dining room, a seating area that doubles as a private dining room boasts a fireplace, seating with banquettes, and two walls of tile installations. The tiles were made by Kelly Farley of Pope Valley Pottery, using clay dug from the riverbanks of the farm. The tiles were glazed using increasing amounts of clay from the farm in the glaze and increasing amounts of iron oxide, creating a grid pattern that is an artistic representation of the R&D process, demonstrating how variables are charted and recorded. The panels surrounding the tiles are compressed, recycled newspapers and magazines.

Each detail is like an Easter egg— its functionality and subtle artistry are what makes it important to the overall picture. Most guests won't ask about the screens: It's not something Kyle needs or wants each guest to be told about, but it's part of what makes Single Thread such a blockbuster (and possibly why it took almost a year longer than expected to open).

Tables are set with ceramics from the Nagatani family from Iga, Japan. The eight generation master potters have produced all of the donabe (earthenware cooking vessels) at the restaurant, plus plates, vases, and other serving pieces. Double titanium water cups are hand hammered, creating insulation that keeps ice from melting, and heat from being lost (read: these cups don’t sweat).

Knives from Bloodroot Blades in Athens, GA appear during the meat course, featuring handles made with wood from the farm and blades forged from a 1968 Volkswagen.

And last but not least: Not only does the restaurant’s bathroom feature a ToTo toilet that jauntily greets guests by raising its lid as they enter the room, but it’s something of a scrapbook of the Connaughton’s journey, incorporating tiles inspired by France, Japan, the UK, and Sonoma— all the places they’ve lived.

The Smallest Winery in Sonoma

This is Sonoma after all, and the restaurant has a sharp focus on local producers. To that end, a 450-gallon concrete fermentation tank lurks on the other side of a window looking into the dining room. Inside that room is zoned for a winery, with its own entrance and street address, making it the smallest winery in Sonoma (and perhaps the country).

Each year a different Sonoma County winemaker will be featured here, using their own grapes and fermenting on the property. “It’s an opportunity for the winemakers to try something out, to be more experimental,” said Connaughton. “It’s really just for by the glass, or the hotel rooms.” The first winemaker will be Pete Seghesio, the owner of the building and the land upon which the farm sits, who plans to start things off with chardonnay.

When guests enter the building through the main entrance, they’re whisked upstairs in the elevator, emerging onto the third floor rooftop. A water feature, fire pit, comfortable seating arrangements, and culinary gardens of herbs and fruit trees serve as the backdrop for the first few courses of dinner, which are prepared and served from the rooftop kitchen (yes, there’s a small kitchen on the roof). It’s also the staging area for all bubbles and aperitifs, served from a sleek wet bar up top.

There are only five rooms at the inn, each one appointed with a friendly Japanese toilet, heated floors, and soaking tubs. A Teforia tea system automatically steeps teas in a method mimicking master tea ceremonies; a refrigerated drawer boasts unlimited Pliny the Elder that is included in the stay. Each one has a paper lantern in the shape of the onion flower, created by artisan Jiangme Wu. Most importantly, breakfast from the Single Thread kitchen is included, with eggs and vegetables straight from the farm.

About 10 minutes from the restaurant and inn sits the farm, on the banks of the Russian River. It’s five acres tended by Katina and her farm team, where they’ve been restoring soil that’s lain fallow for years. It’s on land owned by Seghesio Family Winery, surrounded by rows and rows of grape vines.

Here is where Katina grows specialty produce for the farm, focusing on what isn’t easily found in the region like lily bulbs, Japanese carrots and eggplant, and ginger. Flowers and foliage that are grown on the farm become gorgeous arrangements at the restaurant and inn, and often find their way into dishes, like the bed of autumn leaves found under a foie gras tart. Figs, pears, apples, and olives are all being cultivated on the land as well. But it’s not the sole provider to the restaurant, and that was never the intention; the kitchen also relies on the established, expert growers from Sonoma, with whom they’ve forged close relationships.

The Food and Wine

The menu is a free-flowing revelation, partly because guests are not presented with a written version of it until the end of the meal, but also because that is part of the conversation that Connaughton and his team hope to have with each guest. All dietary requests are heeded, without judgement; many of the dishes are delivered by Connaughton himself.

Three menus will be available nightly (vegetarian, pescatarian, and omnivore), each of which can be customized. The menu is $225 (before tax and service charge), with a wine pairing available at $155, or $295 for reserve wines. (Check out a sample menu below.) Chef de cuisine Aaron Koseba (Aubergine), pastry chef Matthew Siciliano (Michael Mina), general manager David Sisler (Saison) are some of the high-ranking hospitality folk who have committed to living and working in Healdsburg; in a shortage of fine-dining staff, Single Thread seems to have won the lottery.

After all the years of building and planning, and the seemingly infinite amount of details found at this restaurant, Single Thread manages to maintain warmth, and unerringly good taste. This is not a Japanese restaurant, nor a farm-to-table restaurant, though those themes could be easily overplayed— it’s something else entirely.

The restaurant is open as of December 2, Tuesday through Sunday for Dinner; the inn is open seven days a week. Reservations can be made through Tock.