Here's the Menu at Bellota, the Spanish-Influenced Stunner From Absinthe Group

by Ellen Fort@ellenfork May 24, 2016, 8:42am PDT
Via Bellota, Absinthe Group's Spanish-Inspired Spot, Will Open in May [ESF] and The Most Anticipated New San Francisco Restaurants, Fall 2015 [ESF]

Share All sharing options for: Here's the Menu at Bellota, the Spanish-Influenced Stunner From Absinthe Group

Bellota, the newest restaurant from Absinthe Group (Absinthe, Boxing Room), is an amalgamation of the different regions of Spain, as seen through the eyes of executive chef Ryan McIlwraith.

Previously the chef de cuisine at Coqueta, Michael Chiarello's Embarcadero restaurant, McIlwraith is well-versed in the diverse regions of Spain. Though he originally trained in traditional French cuisine, McIlwraith worked at Gordan Ramsey's The London, followed by a stint at Hubert Keller's Las Vegas Fleur de Lys and finally Napa, where he opened Bottega. Then, during his last two years there, the chef spent his time researching for the opening of Coqueta, travelling and eating through Spain, and reading cookbooks.

"Every region has iconic dishes that are different," says McIlwraith. "But it was really the style of eating that loved. I was tired of tasting menus, and really, tapas are the original small plate menu."

At Bellota, that love is translated into several styles of consumption. Guests can start with a taste from the roving pintxos cart, which is filled with goodies like olives, marcona almonds, and "gildas," McIlwraith's take on a favorite Basque-style pintxo featuring an olive, piparra pepper, and both dark and white anchovies. 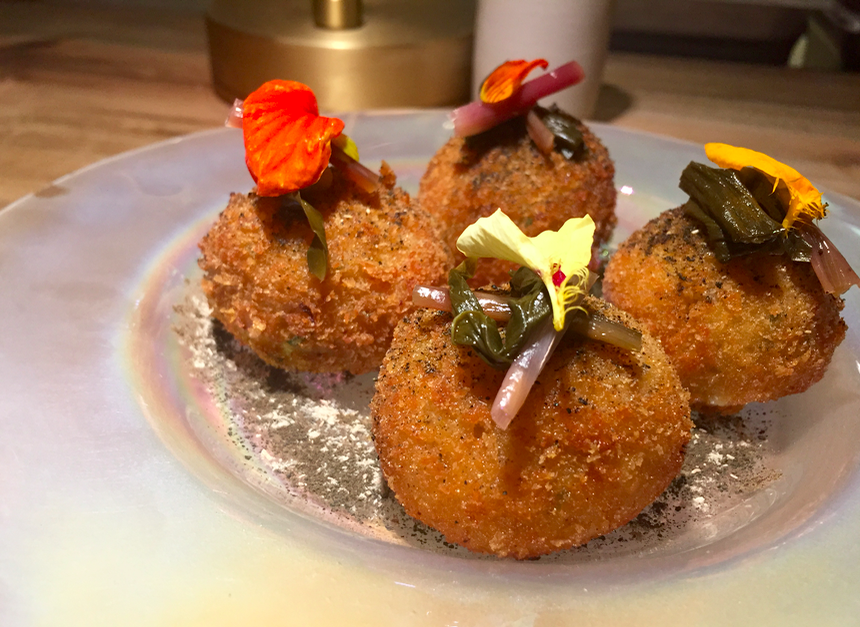 Diners can order dinner at the bar, or in the dining room. Charcuterie and Spanish cheeses are followed by a selection of tapas, which include upgraded favorites like patatas bravas with kennebec potatoes, Spanish tortilla with rainbow chard, and croquetas with clam, sea urchin, pickled ramps and seaweed powder. A "mar and montana" tower takes the place of a traditional seafood tower adorned with just oysters on the half shell, instead offering a selection of raw, steamed and poached seafood dishes.

Meanwhile, paella and dishes from the custom-built wood-fired hearth take center stage. An entire section of the kitchen is dedicated to paella-making, including the use of a divided pan that McIlwraith designed with a local welder to allow diners to try more than one of the rice-based dishes at a time (a regular order serves two to four people and takes 40 minutes). "It's part of the fun experience we want to give people," said McIlwraith. "Allowing them to try a little of everything is more interesting." Hearth dishes, like the grilled, 20 day dry-aged ribeye from Flannery beef with bone marrow hollandaise, are available for order in tapa or racione size.

Desserts are from Stephanie Kimura, executive pastry chef of the Absinthe Group, and include favorites like churros with chocolate to arroz con leche.

Bellota will be open Monday through Saturday, starting Wednesday, May 25.