Liters of beer and wursts play a supporting role

Share All sharing options for: A Big, Beautiful Space Is the Draw at Radhaus, San Francisco’s New German Beer Hall

Review and information for Radhaus

San Francisco needed this: a massive, airy, sun-strewn space to eat and drink where we can show up on a whim without worrying about wind or a wait. And if it happens to serve wiener schnitzel, well, then wiener schnitzel is what we’ll have. The bonus is that it’s Radhaus’s wiener schnitzel — a thinly pounded, flawlessly fried slab of pork, splattered with an herbaceous creme fraiche. It’s so big it barely fits in its white enamel tray, dishware I call “camping chic.”

I wasn’t necessarily craving another restaurant with ginormous portions of heavy German food. After all, we’ve got plenty: Leopold’s and Walzwerk, and Suppenküche and Biergarten — the two Hayes Valley Bavarian-style hotspots that twins Aaron and Matt Hulme own in addition to their brand new Radhaus in Fort Mason. Clearly, though, the brothers believe the city has an ever-increasing appetite for pork sausage and pilsner.

Despite several supersized dishes, Radhaus is lighter than the rest. Consider it Suppenküche’s carefree, oh-so Californian daughter: stylish, a little more health conscious, always wearing sunglasses, even inside. (With a wall of windowpanes revealing the autumn sun, sailboats, and the Golden Gate Bridge beyond, we did.)

Thanks to the view and some 25-foot ceilings, the inside feels like outside, only louder. A humongous 300-year-old hunk of a 200-foot Ponderosa pine, carved by beloved West Marin woodworker Evan Shively, serves as the bar. And behind it is a backsplash of white tiles, giving the place a squeaky-clean shower-house look. Except in lieu of nozzles, there are 13 artful taps: one fashioned from the brothers’ late father’s favorite pipe, another carved from a Mt. Tam tree branch struck by lightning. Also, because this is the Bay Area, there is an antique doorknob spouting a local ginger-lime kombucha.

The menu is the size of a Fillmore poster, broken into a loquacious mix of sections (“breakfast”; “second breakfast”; “snacks”; “brotzeit”; “luncheon”; “supper”; “dinner”) and time slots (“eleven to two” and “eleven to two (and) after five”). I get it, but it requires more brain power than a beer hall’s menu should.

While you parse it over a rare Rothaus, it would seem like a no-brainer to start with a Pretzelina. Thinner and denser than the traditional puffy standard, sprinkled with Maldon flakes and flanked by freshly grated horseradish, it’s lovely — dainty, even. But on all three visits, I found it underwhelming, dry, and almost — dare I say? — stale. Apparently, the guy seated at the next table had similar feelings. “I had a better pretzel last night at the A’s game,” he claimed. Regardless, any Bavarian-style place with a supposedly soft knot on its menu should make sure it’s a good one.

I much preferred to start with the mountain cheese, a mesh of ethereally thin, creamy-smooth curls of Swiss-like cheese from California’s central coast, drizzled with walnut oil, and the cucumber salad, a jumble of crisp cubes tossed with red onion and dill in a zingy Champagne vinaigrette.

It was a wholesome beginning that came to a heart attack-inducing stop with the arrival of our biggest mis-order of the evening: the griebenschmalz, a mini Mason jar of cold, congealed chicken fat topped with chopped Granny Smith apples, served on a plate scattered with tooth-breaking gnarls of fried chicken skin and crackers, which chipped immediately upon dipping, or more accurately, digging. Either way, the schmaltz itself wasn’t worth the effort. It was a jar of flavorless, cloudy, crystalized chub that disappeared on my tongue, in a way that made me wonder why anyone would deem such a thing worth eating.

Other “after five” options (i.e., dinner) went downhill from there. The half-chicken came stabbed in the breast with a dagger. With saggy skin and less-than-juicy meat, it was more dramatic than delicious. Its side of bread dumplings wooed me on the menu, but despite glistening with pan sauce, they were dry and dense. Stalks of tender, well-seasoned roasted broccoli rabe tucked beneath saved the dish from being a total disappointment.

On another visit, I let our server talk me into the bierwurst, and I wished I hadn’t. Maybe because he was a dead ringer for Rolf in the Sound of Music, whom I totally had a tweenage crush on.

“It’s like bratwurst made with Fort Point Westfalia beer,” he promised. But I was ultimately turned off by the two pudgy pork sausages, which, although grilled, tasted more like boiled mystery meat than beer-infused meat. A mushy mound of rotkohl, red cabbage, didn’t help matters. After a couple of bites, I dove my fork into my date’s plate instead: The traditional bratwurst was by far the better order, a quartet of chewy, slightly charred links scattered with fried shallots, over a bed of sauerkraut.

Overall, as far as food- and beer-induced fun, Radhaus is at its best during lunch — when the chicken schnitzel sandwich is as crisp, delightful, and downright beautiful as the view. It’s a slender, juicy thigh, heavily breaded in crumbs from Mayfield Bakery and set between two slices of toasted French bread, with electric-pink pickled onion, crisp cabbage and cucumbers and a touch of dill, dripping in a tangy buttermilk sauce.

On one recent Sunday afternoon, the bay was sparkling and the Fort Mason Farmers Market was in full swing, and our party of six piled in, sans reservation. I fully expected to hear the requisite “it’ll be an hour” and instead, we were seated within five minutes.

Radhaus’s slotted wood tables were filled with frat guys and families, logo-clad techies and Fisherman’s Wharf-bound tourists — disparate demographics you don’t often see sitting side by side in this siloed city. Together we downed refreshing Radlers (Andech Helles mixed with lemon soda). We slurped soulful bowls full of pork broth, floating with a plump, super-mild weisswurst, little lily pads of fresh herbs, and a delicately poached egg: an ideal antidote to a hangover, especially when paired with a fiery, unadorned Bloody Magdalena, served in a rocks glass with Austrian vodka and a healthy splash of lime.

That’s what I like best about Radhaus. It has room for everybody — as a former WWII U.S. Army post-turned-restaurant located within a Golden Gate National Recreation Area should. The only not-so democratic thing about the place is — surprise, surprise — its prices.

At $22, a liter of imported Schneider Edelweisse beer will cost you two bucks more than a plate of Radhaus’s ribs, which are hefty, doused in a tomato-based barbecue sauce, and fork-tender, but nothing to trek to Fort Mason for. True, a liter is a lot of beer. And, of course, you could always order a half-liter, at half the price. But either way, here’s betting you’ll order more, maybe many more. After all, that’s why you came here, isn’t it? At Radhaus, every day is Oktoberfest. A sophisticated, San Francisco-style Oktoberfest.

Ultimately, though, it’s neither the wiener schnitzel nor the Weihenstephan Hefeweissbier that would bring me back to what will undoubtedly be Fort Mason’s new mainstay. It’s the soaring, gorgeous space itself — and the rare ability to stroll in with friends, or family, at any hour (be it “eleven to two” or “after five”) for a perfectly fine meal, with four-star scenery. Radhaus is a good reminder that sometimes, even in food-obsessed San Francisco, it’s okay to merely like your meal, if you love where you’re eating it.

Our review of Radhaus 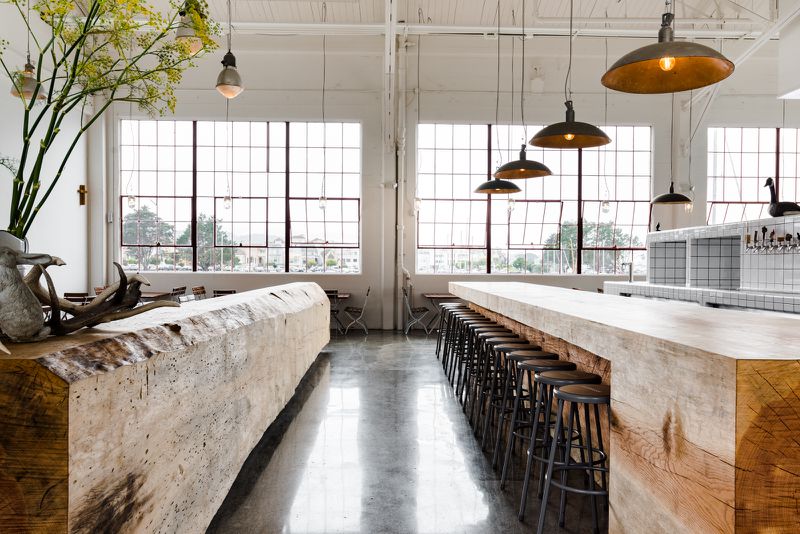 What it costs: For two liters of beer, a couple of snacks, one large plate, and two entrees, call it close to $200 before tax or tip.

What to drink: The Radler was refreshing, but in general, I found the heavier (Andechs Doppelbock Dunkel) or hoppier (Schneider Hopfenweisse) beers more satisfying than the lighter ones. There’s a short list of German and Austrian wines, too. And for kids, the Kinderbier: Radhaus’s version of a Shirley Temple.

Bonus: It’s surely being on the bay in Fort Mason where there are art galleries, the Sunday farmers market, the beloved FLAX art supply store, and intriguing Tuesday-eve “salon talks” at the Interval next door.

Editor’s Note: This will be Rachel Levin’s last restaurant review for Eater. She’s taking time to focus on book deadlines and Eater is re-evaluating investment in SF restaurant criticism. Please continue to follow Levin’s restaurant-related instagram @offmenusf and stay tuned for more of her (non review) writing here in the months to come.

Update (Oct. 12, 2018): The editors removed a reference to Nazi Germany that was unnecessary to the storyline.